Welcome to YA Scavenger Hunt! This bi-annual event was first organized by author Colleen Houck as a way to give readers a chance to gain access to exclusive bonus material from their favorite authors…and a chance to win some awesome prizes! At this hunt, you not only get access to exclusive content from each author, you also get a clue for the hunt. Add up the clues, and you can enter for our prize–one lucky winner will receive one signed book from each author on the hunt in my team! But play fast: this contest (and all the exclusive bonus material) will only be online for 72 hours!

Go to the YA Scavenger Hunt page to find out all about the hunt. There are EIGHT contests going on simultaneously, and you can enter one or all! I am a part of the PINK TEAM–but there is also a red team, a gold team, a teal team, a purple team, an orange team, a green team, and a blue team for a chance to win a whole different set of signed books!

If you’d like to find out more about the hunt, see links to all the authors participating, and see the full list of prizes up for grabs, go to the YA Scavenger Hunt page.

Here’s how to play:
Directions: Below, you’ll notice that I’ve listed my favorite number. Collect the favorite numbers of all the authors on the indie team, and then add them up (don’t worry, you can use a calculator!).
Entry Form: Once you’ve added up all the numbers, make sure you fill out the form here to officially qualify for the grand prize. Only entries that have the correct number will qualify.
Rules: Open internationally, anyone below the age of 18 should have a parent or guardian’s permission to enter. To be eligible for the grand prize, you must submit the completed entry form by April 5th, at noon Pacific Time. Entries sent without the correct number or without contact information will not be considered.
Today I’d like to introduce author Janna Jennings!

Janna is a Colorado based YA author who loves a good fairy tale. She’s married to her own real life Prince Charming, and will usually admit to being mom of three, including her incorrigible middle child, Benny. Besides wrangling her kids she can be found doing some therapeutic baking, dreaming of the ocean, and of course, curling up with a good book. 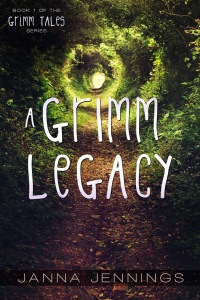 Janna is the author of A Grimm Legacy, the first book in the Grimm Tales series.

Enchanted castles and charming princes thought to exist only in stories come to life in this classically twisted fairy tale that combines the timeless quality of folktales with the challenges of the modern world.

The woods of Elorium appear ordinary to Andi… until the birds start to talk and elves answer doors. Whisked out of her world along with three strangers, Andi finds herself the reluctant guest of the perplexing millionaire, Mr. Jackson, a stranger willing to help get them home, but who’s keeping secrets of his own.

Discovering unexpected family connections to this fairy tale land, the group must rely on each other as they dodge evil fairies and battle giants intent on keeping them in Elorium.

Faced with characters short on whimsy and bent towards treachery, Andi, Quinn, Fredrick and Dylan are forced into fairy tale roles to find the home. But in Elorium, happily ever after is never guaranteed.

I love fairy tales, and this one sounds great! You can purchase A Grimm Legacy here!
Today Janna is sharing an exclusive sneak peek at her upcoming book, A Grimm Curse.

Cynthia crept past the weed-choked flowerbeds. A few roses struggled to bloom amid the neglect, but the place looked sad and forgotten. A small man-made pond sat in the shade of the near by pine trees. This is where the Wellington property ended and the forest began. Water still trickled into the pond, keeping the surface clear. Wild grasses had grown up along the edges, but it made the little spot look more natural, probably what the frog was used to.

Cynthia sat on a rusting wrought iron bench and reached into her pocket, freeing the frog. His skin felt tacky and rough. He’d been out of the water too long. She lowered him into the water.

She stood up to leave. The frog seemed to shake itself out of a stooper. It kicked several times, propelling itself across the surface of the water with the awkward hind kick particular only to frogs. Rolling on its back, it sighed and said, “Ahh much better.”

Cynthia blinked hard and sat back down on the bench. The frog stroked back to her and hopped to the edge of the little pond where it sat half in, half out of the water.

“You’re not a princess, are you?” Beyond the harsh, throaty quality of its voice that was not quite human, the frog was male and hopeful.

Cynthia opened her mouth to reply and popped it back closed again. It was one thing to understand birds. Their peeps and trills seemed to translate themselves inside her head. Bird vocabulary was limited and repetitive. Frankly, they weren’t overly bright. It was not like talking to another person.

She’d heard the occasional rumor of talking animals. It wasn’t unheard of in Elorium to get advice from a fox, and there was a fairly famous troupe of singing animals that traveled around, although she had never seen them.

The frog blinked his bulbous eyes and a frown seemed to tug at his wide mouth. “Sorry, I know it can be a bit of a shock. You’ve got a surreal look on your face.”

“No, I—“ Cynthia paused and cleared her throat trying to rearrange her features into something other than stunned. “I understand birds. I just wasn’t expecting—you took me by surprise. That’s all.”

“Birds? I’ve never heard of that before.”

It was strange to watch the creature’s thin, flat lips move and words come out. It was like watching a puppeteer.

“I—“ she decided to steer this strange conversation away from herself. “What were you asking?”

“Oh.” the frog splayed his webbed toes on his right foot. “Are you a princess? I mean, I know you don’t live in a castle, but I thought perhaps you were one in hiding?” The frog had ducked his head and looked up at her out of the top of his eyes like a hopeful boy.

Cynthia felt a smile wanting to tug at her lips. “I’m not. Sorry.”

“I’m Cynthia.” She held out her name like some kind of pitiful offering.

“Remi.” The frog waved a half hearted webbed hand at her and sank with his chin in the water until just his mouth and eyes jutted out.

She waited a second, and when no further information was forthcoming she prodded, “So…”

Remi’s head came up slightly. “How am I a talking frog?” A half grin twisted on his face. “Sorry, this is the longest conversation I’ve had. Most people scream and run. Or try to hit me with things.” He looked up at her with an expression Cynthia couldn’t read. She didn’t know if it was the look or the fact that it was on a frog’s face that was creating the difficulty. Something moved her to bend down and hold out her hand. Remi hesitated just a second before hopping into her palm. The pads on his feet were delicate and damp. She placed him beside her on the bench and waited.

“I haven’t actually tried talking to anyone in awhile, but you seem…” here the frog appeared to be selecting the right words, “like a person to take a chance on.”

“Because I rescued you?”

A brief image came to Cynthia of an abashed young man. That smile wanted to curl her lips up again. Twice in one day. It wasn’t a problem she usually had.

“I’m not saying you didn’t help,” he added. “Can’t deny I’d gotten myself in a pickle. It wasn’t just that.” He’d turned thoughtful. “It was more a feeling you were someone who might understand.”

Look for A Grimm Curse this fall!

Don’t forget to enter the contest for a chance to win a ton of signed books by me, Janna, and more! To enter, you need to know that my favorite number is 8. Add up all the favorite numbers of the authors on the indie team and you’ll have all the secret code to enter for the grand prize!

And that’s not all! I’m also giving away a $10 Amazon gift card along with a Silver Moon Saga swag pack, which includes a signed 5×7 photo card of The Soul Healer and some stickers to one lucky winner! To be eligible to win, enter the Rafflecopter below! The contest is opened internationally.

Now I’ll send you on your way to Jennifer Comeaux’s blog. As you’re visiting the other blogs, be on the lookout for a bonus scene from THE SOUL HEALER that I wrote specially for this contest. I’d love to hear what you think of it! Good luck and happy hunting!

8 thoughts on “The Spring YA Scavenger Hunt is here!”