All good things must come to an end, and today I’m sharing the cover of the final Smoke and Mirrors book, THE SLEEPING ANCIENT. When I first started writing THE FADING DUSK, I never imagined I would end up with a six book series. I figured it would be another trilogy, with maybe a novella containing some short stories. But after I started writing book two, things began shifting drastically from my intended outline, and I knew I was going to need another full length novel in order to tell Irina’s story properly.

And what a story it’s been.

THE SLEEPING ANCIENT releases May 22nd. It’s the longest book in the series, and I found it hard to say goodbye to these characters. But I’m satisfied with their ending, and I hope you will be, too!

And now, because I’ve had you wait long enough, here’s the cover!

Once again, Regina Wamba of Mae I Design has blown me away with this gorgeous, stunning cover! All the little details are perfect, and I love that Irina is looking straight at you this time. Irina’s growth throughout this series is so important, and I wanted a cover that symbolizes how strong she’s become. She looks absolutely badass and I love it.

Let’s take a look at the full wrap! 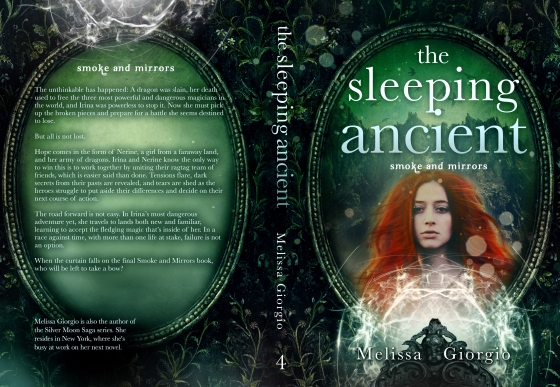 The entire series! Don’t they look amazing together?

Add THE SLEEPING ANCIENT to your Goodreads to-read list!

Hello! I’m sorry for my extended absence, but I’ve been working on the final Smoke and Mirrors book for the last few months. The hard part (writing and editing) is done, so I can finally share some fun things!

First of all, the title! The final book will be called:

It took me a long time to come up with that one. I can’t tell you who or what the sleeping ancient is, but I can say it’s a character we haven’t met yet.

I have another treat for you, the blurb! This is full of spoilers for the last two books, so if you haven’t read THE WHISPERING ECHOES or RUN AND TOUCH THE SKY, maybe don’t read this?

(Last chance to look away!)

The unthinkable has happened: A dragon was slain, her death used to free the three most powerful and dangerous magicians in the world, and Irina was powerless to stop it. Now she must pick up the broken pieces and prepare for a battle she seems destined to lose.

But all is not lost.

Hope comes in the form of Nerine, a girl from a faraway land, and her army of dragons. Irina and Nerine know the only way to win this is to work together by uniting their ragtag team of friends, which is easier said than done. Tensions flare, dark secrets from their pasts are revealed, and tears are shed as the heroes struggle to put aside their differences and decide on their next course of action.

The road forward is not easy. In Irina’s most dangerous adventure yet, she travels to lands both new and familiar, learning to accept the fledging magic that’s inside of her. In a race against time, with more than one life at stake, failure is not an option.

When the curtain falls on the final Smoke and Mirrors book, who will be left to take a bow?

And finally, I’m pleased to say the book will be coming this May! That’s not too far away! There will be a cover reveal in April, which I’m super excited about. I really enjoyed writing this one and I can’t wait to share it with everyone!

It’s release day again! I can’t believe this is my tenth book! Thank you to everyone who’s been with me through this amazing journey, starting with THE SIGHT SEER back in 2013.

Today it’s all about RUN AND TOUCH THE SKY, a book that is very dear to me. As much as I struggled with this book, I’m proud with the end result, and I hope you enjoy it, too!

Again, this is a novella, which means it’s not part of the main story which features Irina as the narrator, but this book, like BY THE MORNING LIGHT, is very, very important to the Smoke and Mirrors series. In fact, a character introduced in RATTS (like that abbreviation?) is probably the most important character in the whole series (well, Irina is pretty important, too 😉 )! You can read this one on its own, but I strongly suggest reading the story in the order they were released:

Yes, this is the penultimate book in the Smoke and Mirrors series. It’s almost over! But until then, I hope you enjoy Nerine’s story and RUN AND TOUCH THE SKY.

Here we are with another cover (and title!) reveal! This time it’s for the next book in the Smoke and Mirrors series. Without further ado, I present the cover for RUN AND TOUCH THE SKY.

I love it. The mountains! The sky! The colors! It’s gorgeous.

So you’re probably thinking a couple of things. First of all, it doesn’t match (title or image wise) THE FADING DUSK, THE BURNING CHAOS, or THE WHISPERING ECHOES. And wait, what’s that, ANOTHER novella? Yes, yes, this is not the next (and final!) book in the Smoke and Mirrors series. Yes, you have to wait a bit longer to find out what happens next after the cliffhanger of THE WHISPERING ECHOES. Yes, I’m evil. I know.

Okay, look, I never intended on writing this one. I know, I know, I say this all the time, but it’s true! I was all set on writing the last book when two new characters appeared and I had to write about them. Once I started developing the characters, the setting, the story, I realized this was the missing piece of the puzzle I’d been looking for. Just like BY THE MORNING LIGHT, Irina’s story could not continue without telling the story of RUN AND TOUCH THE SKY first.

So, what’s it about? Here’s the blurb (warning for slight spoilers for the other books!):

In a world where magic is real and dragons are extinct, the people of Meradell are keepers of a great secret: Dragons live. Highly protective of these magnificent creatures who were prosecuted relentlessly during the old wars, the Meradellans promised two hundred years ago to never betray them. But even though the ancient beings live peacefully, the magic is dying, and no new dragons have hatched in nearly three hundred years.

At fifteen years old, Nerine is in awe—and just a touch envious—of her older sister’s bond with one of the majestic beasts. When her sister’s dragon—the last one to hatch in the mountains—might become a mother herself, Nerine wonders why her sister should have all the glory. Setting off with her best friend, Nerine climbs the mountains in hopes of glimpsing the hatchlings.

What she encounters there is nothing she imagined or expected, and a disastrous chain of events brings about both the worst and best moments of Nerine’s life. Now she must learn to heal her heart and look to the future if she hopes to save both the dragons and herself.

Featuring a new cast of characters, Run and Touch the Sky is the penultimate book in the Smoke and Mirrors series by author Melissa Giorgio.

BY THE MORNING LIGHT was Claudette’s story, and RUN AND TOUCH THE SKY is Nerine’s story. As you can see, this is a new city with a whole new cast of characters (well, with one familiar face). This story is directly tied to Irina and Claudette’s story and sets up the final book in the Smoke and Mirrors series. I love Nerine and the other characters in this book, but let me tell, this one was a hard one to write.

Oh, and don’t let the word “novella” fool you. This one is novel-sized. But no one is complaining about that, right?

Here’s the full wrap, which shows off more of the beautiful mountains:

What do you think? I hope you’re excited to read Nerine’s story! While it doesn’t have an official release date, I’m hoping to have it out by the end of the year. Stay tuned for details. 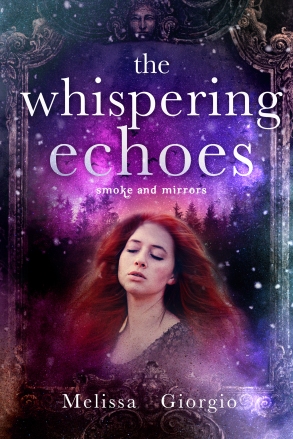 Today’s the day! Irina’s story continues in THE WHISPERING ECHOES, the third full length novel in the SMOKE AND MIRRORS series!

I’ve been pretty quiet about this book because I don’t want to spoil anything, especially for those of you that haven’t read the earlier books. But I can say that I enjoyed writing this one and as of right now, it’s probably my favorite in the series. It’s crazy how different this book is from what I originally planned. And that’s mostly thanks to BY THE MORNING LIGHT. (Have you read that yet? If not, I strongly suggest reading it BEFORE you dive into THE WHISPERING ECHOES!) I love Claudette and Emile, and I’m so happy they were able to join Irina on her journey.

I really hope you enjoy this one!

Hello! I have some exciting news today. It’s time to reveal the title of the third book in the Smoke and Mirrors series. Are you ready?

Book three will be called…

What do you think? I’m rather fond of this one, and I think it goes nicely with The Fading Dusk and The Burning Chaos.

So, I really can’t tell you much about the book. I’d share the blurb, but it’s full of spoilers. Here’s what I can say about The Whispering Echoes:

You can go ahead and add The Whispering Echoes to your Goodreads to-read list. And, as always, there’s a Pinterest board!

The Whispering Echoes will be released in 2017! Stay tuned for an official book release date and a cover reveal! 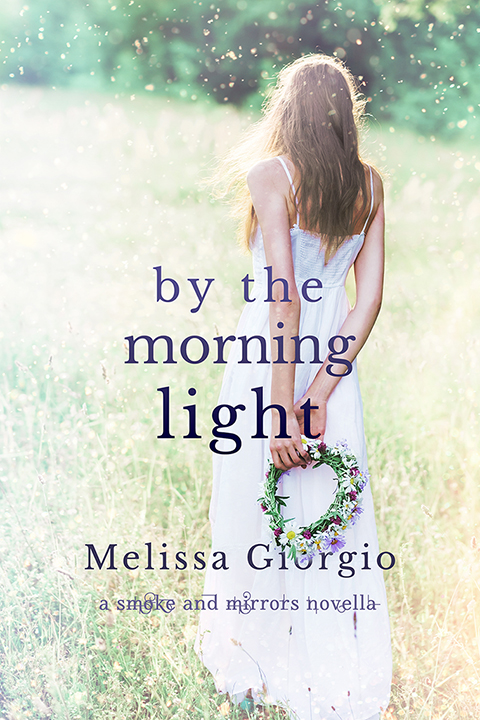 It’s that time again… Release day! I’m especially excited about this one. BY THE MORNING LIGHT was the book I never expected to write, but I’m so glad I did. These unexpected stories (like A PROMISE OF MAGIC from the Silver Moon Saga) always hold a special place in my heart and I hope you enjoy BY THE MORNING LIGHT as much as I enjoyed writing it!