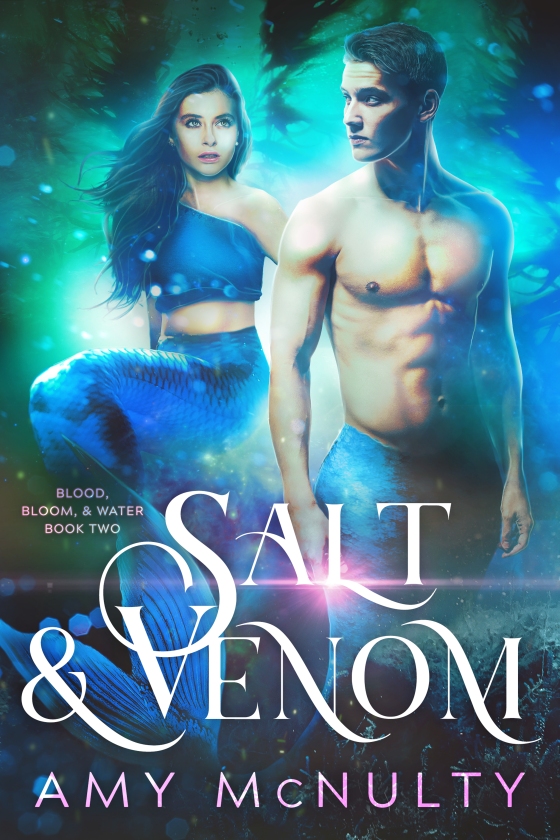 An emboldened merman. The daring girl who agreed to be his champion. The upcoming battle that threatens to change everything they believe in.

Ivy Sheppard never wanted the ability to turn into a mermaid—though her wicked ice powers are nothing to sneeze at. Now her step-sister is her enemy, the fairy she once trusted may not be the ally she hoped for, and her new boyfriend wants her to transfer schools to avoid the vampires taking over Union High. Between dodging parents’ concerns, pretending she can stand to even look at the step-sister who sided with the bloodsuckers, and still aiming to end it all without violence, Ivy is in over her head. Unfortunately, these ancient enemies are itching to get the conflict started and Ivy may have no choice but to become the warrior the merfolk need her to be.

The second book in the Blood, Bloom, & Water series starts the war between fangs and fins in earnest as the merfolk plan their assault to bring down the unnatural undead vampires once and for all.

Today I’m very excited to share with you the cover of Amy McNulty’s upcoming YA novel, Fangs & Fins, the first book in the Blood, Bloom, & Water series! I had a chance to read this one already and I can tell you that you’re in for a treat. Plus, this cover! IT’S SO PRETTY! A dapper vampire. A sullen merman. Two heirs to a great conflict—and each needs to claim a beloved to become his kindred’s champion.

High school senior Ember Goodwin never had a sister, but after her mom’s remarriage, she now has two. The eldest is no stranger to her—Ivy is a witty girl in her grade who’s almost never spoken to the shy bookworm before—but she’s surprised to find the popular girl quite amiable. Their burgeoning friendship is tested, however, when Dean Horne, a pale, besuited charmer, shows interest in them both and plans to reveal his appetite for blood to the one who’ll stand by his side.

Seventeen-year-old Ivy Sheppard is tired of splitting her time between her dad’s and her mom’s, particularly when her dad uproots their lives to move them in with his new wife and step-daughter. Used to rolling with her parents’ whims, she tries to make the best of it and befriend her nerdy new step-sister. Her hectic life grows more unwieldy when she catches the eye of junior Calder Poole, whom she swears she sees swap well-toned legs for a pair of fins during a dip in a lake. Now she’s fending off suitors left and right, all while trying to get to the bottom of the strange happenings in her town.

The first book in the Blood, Bloom, & Water series sets family against family and friend against friend as an epic, ancient war comes to a head in a supposedly sleepy suburb.

Add it on Goodreads
Preorder it on Amazon today! (99¢ for preorder and first week of sale only)